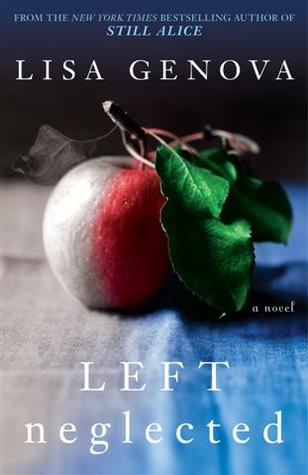 Hey there, strangers! I have not posted on this blog in over three years, but lately I have read a plethora of books and have been inspired to start blogging again! So, forgive me if I am a little out of practice, but I am hoping to get back into the swing of things.

I was first introduced to Lisa Genova’s books through the Psych Book Club at my college. For the club, I read Still Alice, but I was eager to read Left Neglected as soon as I could. For those of you who don’t know, Lisa Genova is an accomplished neuroscientist who also writes books that rip your heart out while you sob uncontrollably. One of my majors is Behavioral Neuroscience, so I have both an academic and emotional attachment to these novels. I love being able to relate information I have learned in school, as well as learning new things, while I am also reading for pleasure. It is such a remarkable experience that I have not had many other times. However, you absolutely do not need any sort of science background to enjoy the book – it is an incredible story all on its own…

Sarah Nickerson wants it all, and she will work for every damn piece of it – a Harvard Business School degree, an equally accomplished and very attractive husband, an exquisite house in the Boston suburbs, and three perfect children. The only thing she may not have is her sanity.

One rainy Friday, Sarah was elated to get a head start on her commute without needing to drop the kids off first. However, her eagerness to start her day with a phone call ended when she looked up and saw all the brake lights her car was racing into.

When Sarah finally wakes up, she seemed to be fine despite the staples in her partially shaved head and the expected soreness, but one subpar hospital meal revealed otherwise. Sarah’s brain injury resulted in her having left neglect – an uncommon condition that essentially causes her to lose the left side of everything.

Sarah now has to learn how to live in a world that is half of what it used to be. Her role as a mother, wife, daughter, corporate worker, patient, friend, and person all have to be relearned, for better or worse.

Lisa Genova does an impeccable job of exploring Sarah’s journey of healing, making new friends, taking care of her son’s possible ADHD diagnosis, battling with health insurance, and finding her new place in the world. My heart strings were being pulled in every direction at every second. While I may not have lost the left side of everything, I felt as if I understood Sarah. I kept feeling the urge to “look left.” Her battles were somehow not much different from those of many other women trying to find their place in the world.

The thing that struck me the most was how closely I felt I could relate to Sarah. While I may not be married or a mother, I understand her drive to be perfect at everything and her desire to just work for everything she wants. I sympathized with her when all she wanted was a full recovery, and she worked so hard for that recovery, but she was never guaranteed anything. I understand her emotional distress when she realizes that she does not have complete control over the situation. I could feel what Sarah was feeling at so many points and I just wanted to fix everything for her, but that is the thing – everyone just wanted to fix what likely couldn’t be fixed.

I was also intrigued by the parallels between Sarah, her mother, and her oldest son, Charlie. Both Sarah’s mom and Charlie suffer from mental disorders, but Sarah had always had a hard time relating to them. Sarah resented her mother for not being present for her childhood, and could not fathom why Charlie could not simply get dressed and brush his teeth in the morning. However, after her brain injury, Sarah started paying more attention to them and their lives, even if it was not her choice to have her mother in her life again. Sarah was now living with her own disorder caused by her brain, and was struggling with a multitude of things that were just so simple for most “normal” people”. While it took a tragedy, Sarah could finally glimpse into what life was like for her loved ones. These three characters truly shine light on how different mental disorders can be. Charlie was born with ADHD, Sarah’s mother developed depression later on in life, and Sarah has left neglect due to a brain trauma – three very different mental disorders with three very different causes and symptoms. Despite their differences, these three individuals could bond over their struggles and help each other through them.

Most importantly, Sarah realizes how valuable time with her family and new friends truly is. She had previously prioritized work because that made her money, but she hadn’t truly taken into account the cost of missing soccer games, school plays, or even her child’s first steps. She never truly understood how or children or mother thought, because she was only seeing things from her perspective, which was focused on money and moving up in the world, and not on being happy and enjoying the little moments in life.

On another note, when Sarah and her husband, Bob, were out for an anniversary dinner after the accident, there is an absolutely HILARIOUS passage that is worth reading the entire book for, just a little FYI. I’m just saying, bringing your husband into a public women’s restroom to help you pull up your pantyhose will welcome a few stares and looks of confusion.

All in all, Lisa Genova has done a spectacular job empowering women to achieve all of their goals, while also reminding them about the things that matter. It’s important to not take life too seriously and to work to understand the struggles that those around you are going through.

I definitely recommend this book to anybody and everybody. I truly wish I could read this book for the first time over and over again. It such a remarkable read.